Andrew Stenson is quickly building a reputation as one of the United States’ most exciting young tenors, with a brilliant tone, artistic intellect, and superb portrayals of a variety of roles. He is the first prize winner in both the 2015 Giulio Gari International Vocal Competition and 2016 Gerda Lissner Foundation Competition. He is also the recipient of a 2011 Sara Tucker Study Grant from the Richard Tucker Foundation. During the 2019-2020 season, Mr. Stenson will make his debut with Opera Colorado as Almaviva in Il barbiere di Siviglia. He will return to Utah Opera as Sprink in their production of Silent Night, and appear with St. Paul Chamber Orchestra in Mozart’s Requiem. Mr. Stenson’s 2018-2019 season began with his Dallas Opera debut as the Steersman in Der Fliegende Holländer. He joined the Minnesota Opera as Fadinard in The Italian Straw Hat, as well as Utah Opera as Tamino in Die Zauberflöte. He appeared with Mostly Mozart Festival for Mozart’s Requiem, the Cincinnati Symphony for St. Matthew Passion, and the Philadelphia Orchestra as King Kaspar in Amahl and the Night Visitors. The 2017-2018 season included the tenor’s role and company debut with Wexford Festival Opera as Ernesto in Foroni’s Margherita. He also returned to the Lyric Opera of Chicago as Ferrando in Cosi fan tutte, sang the title role of Candide with the San Francisco Symphony, and made his company debut with Opera Theatre of St. Louis in the world premiere of the two-act version of An American Soldier, singing the role of Danny Chen. Mr. Stenson’s 2016-2017 season included appearances as Tamino in Die Zauberflöte with Seattle Opera, Frederic in Pirates of Penzance with Palm Beach Opera, the title role of Candide with Théâtre du Capitole, Toulouse, and Opéra National de Bordeaux, and a company debut with Washington National Opera as Tonio in La fille du Régiment. He also appeared in concert with the Kansas City Symphony for Mozart’s Requiem. He concluded the season with a return to Glyndebourne Festival Opera to sing Ernesto in Don Pasquale. During the 2015-2016 season, Andrew Stenson made his Lyric Opera of Chicago debut, singing Gen in the world premiere of Bel Canto. He also debuted with Arizona Opera as Don Ottavio in Don Giovanni, and with Fort Worth Opera as Count Almaviva in Il barbiere di Siviglia. In concert, he sang the Messiah with the Cincinnati Symphony and Britten’s Serenade for Tenor, Horn and Strings with the Rochester Philharmonic. In the 2014-2015 season, the tenor finished as a member of the Metropolitan Opera’s Lindemann Young Artist Development Program. Amongst his assignments, he performed Beppe in Pagliacci, in a new production conducted by Fabio Luisi. In the summer he returned to the Glimmerglass Festival, as the title role in Candide. Andrew Stenson was a 2nd year member of the Lindemann Program during the 2013-2014 season. He performed Demetrius in The Enchanted Island at the Metropolitan Opera, and also made a return to Seattle Opera as Tonio in La fille du régiment, and his role debut as Belmonte in Die entführung aus dem Serail with Utah Opera. Additionally, Mr. Stenson appeared on the concert stage with the Seattle Symphony and Nashville Symphony, for Handel’s Messiah, and sang Mozart’s Requiem with the Hartford Symphony Orchestra. In June 2014, he made his Washington National Opera debut as Danny Chen in Huang Ruo’s An American Soldier. The summer of 2012 found him with San Francisco Opera’s Merola Program for Argento’s Postcard from Morocco. During the 2012-2013 season, Mr. Stenson joined the Metropolitan Opera’s Lindemann Young Artist Development Program. His assignments at the Metropolitan Opera that season included Esquire #3 in the company’s new production of Parsifal. The season also found his debuts with the San Francisco Symphony, for Handel’s Messiah, and with the Glyndebourne Festival Opera, as Brighella in a new production of Ariadne auf Naxos. Mr. Stenson began the 2011-2012 season with the Seattle Opera as Le Remendado in the mainstage production of Carmen. Continuing the season, he performed Orphée in Orphée et Euridice, replacing an indisposed colleague on short nice, and performed both the title role in Werther and Ernesto in Don Pasquale in the company’s Young Artist Productions. Also in 2011-2012, Mr. Stenson made his Metropolitan Opera as a Rameau Quartet Member in The Enchanted Island, and made his role debut as Cassio in Knoxville Opera’s production of Otello. The summer of 2012 found him with San Francisco Opera’s Merola Program for Argento’s Postcard from Morocco. The tenor joined the Seattle Opera as a member of its Young Artist Program for the 2010-2011 season, where his roles included Arturo in Lucia di Lammermoor on the mainstage, and Don Ottavio in the Young Artist production of Don Giovanni. In the summer of 2011, he returned to the Glimmerglass Festival, performing Jimmy O’Keefe in John Musto’s Later the Same Evening. In previous seasons, the tenor appeared as Martin in The Tender Land with Glimmerglass Opera. Mr. Stenson was a Young Artist with the Santa Fe Opera in 2009, where he covered Head Man in The Letter and received the D. Gramm Memorial Award. He was a Regional Finalist in the 2010 Metropolitan Opera National Council Auditions. Mr. Stenson is the 2015 recipient of the Richard F. Gold Career Grant from the Shoshana Foundation (Lindemann Program), a Major Award Winner from Opera Index (2015), Second Prize winner from the Queen Sonja International Vocal Competition (2013), and Second Prize winner from the Licia Albanese-Puccini Foundation (2015). Andrew Stenson completed his Master’s Degree in Music at Cincinnati College-Conservatory of Music (CCM). He earned his Bachelor of Arts in Music from Luther College. 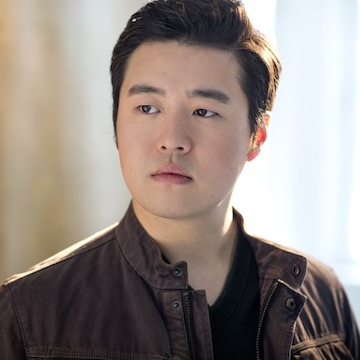